This time last year, a short story I wrote was one of six shortlisted entries in the Australian Writers’ Centre’s monthly Furious Fiction competition. Each month you are given a different set of story prompts and just 55 hours to submit your 500-word story. Since then, I have entered the competition every single month. This sometimes meant hitting the submit button at 11.55 on a Sunday night, 5 minutes before the deadline. Most of my stories would have benefited from another day of editing, and some of them would have remained average even with another month of re-writing, but I submitted them anyway. The challenge makes me focus my writing, forces me to be creative, gives me a wonderful sense of accomplishment at the start of every month, and then nervous anticipation for the announcement about 3 weeks later. (Living on the edge stuff, right here.)

So, 11 submitted short stories later, we got to May 2019. This was the criteria:

The force must have been with me, this May as well, because my Bruce Springsteen-inspired story made it to the shortlist! Here it is…. 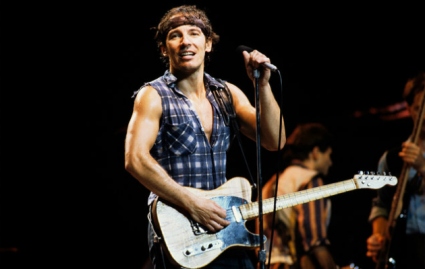 “Springsteen? Yeah, I know his music.” He took a sip of water and glanced around the restaurant.

She was relieved. A good start. She raised her wine glass to her lips and tasted the Pinot Noir. It was smooth, like Springsteen’s voice in I’m on Fire.

“He is a bit miserable though, isn’t he?” He shot her a quick look. “All those songs about struggle and loss?”

The Pinot caught in her throat and she coughed. He looked up from his menu with raised eyebrows.

She did not like his tone. It was too nonchalant. This was a highly important topic. A non-negotiable.

“Well,” she began, carefully. “He sings about the hardships of everyday life. And about his dismay at the contrast between dreams and reality. But he…”

She bit her lip. This was not going well. Still, she would persevere. After all, Bruce had been telling her for years to look for that human touch, that two hearts are better than one, and most importantly, that faith will be rewarded. She would have faith. This one even looked like him. In the dim lighting of the restaurant. If she squinted.

The waiter arrived. They ordered the seafood platter for two.

“Hold the garlic mayonnaise though,” he said, with a wink that she deliberately ignored.

“I don’t think you understand,” she frowned. “Springsteen…his music helps us escape the misery and the mayhem of this complex world we live in. He believes in a better future, in the real possibility of happiness!”

He looked at her, bemused. “You’re a proper fan then?”

“I am his biggest fan,” she emphasised, realising with every passing moment that, once again, her suitor was unsuitable.

This one was also oblivious. “I know they bestowed upon him a title of some sort. What was it? The King?”

She shook her head in disbelief. “That was Elvis.”

“Oh, right. Was he a Sir, then?” He seemed to be chuckling to himself and she wondered how someone so ignorant could also be so arrogant.

“You’re thinking of Elton John.” You idiot, she wanted to add.

“Mayor, perhaps?” He would not give up. She was running out of patience. Time to put herself out of this misery.

Maybe this wasn’t such a good idea, she thought. The rest of their dinner was peppered with small talk. She was already planning her escape. As they stepped outside into the cool autumn air, she held out her hand to avoid any human touch beyond a handshake.

“Thank you for tonight,” she said. “But I don’t think we’ll see each other again.”

“That’s cool,” he said, squeezing her palm. “If there’s no spark, there’s not much you can do.”

She was about to nod in agreement when she caught the glint in his eye as he continued.

“My dad always said you can’t start a fire without it.”

The judges said….
What we liked:
This was a fun first date scene that manages to do what many fail at – find a good balance between the external action and internal dialogue. Well-paced and sprinkled with humour, it saves a little in the tank for an ending that delivers a dose of intrigue. Simple storytelling, effective in bringing this tale of hungry hearts to life.

I recently made two short trips to Malaysia in the space of about six weeks. The first, in March, to spend a few days with my grandmother, who had not been well.

The flight out was delayed due to a thunderstorm in Sydney. So the four-day trip would be cut short to three. Waiting at the airport for information, frustrated at the thought of one less day with my grandmother, I contemplated cancelling the trip and rebooking for another weekend.

I’m glad I didn’t. Because the second trip I made to Malaysia, in April, was for the religious ceremony that would mark her passing. Those three days in March ended up being my last moments with someone whose impact and influence on my life cannot be measured.

To help with the healing, I wrote an article about my grandmother. As I typed, in Microsoft Word, the spell-check decided to call out the word Muthashi, as it did not recognise the Malayalam word for grandmother. One of the options it suggested was Mothership.

Mothership, noun.
– A spacecraft or ship from which smaller craft are launched or maintained.
– A place regarded as a base, source, or headquarters.

I usually get annoyed at the ridiculous suggestions offered by spell-check.

But this time, I had to agree.