I read a ‘Fun Fact’ the other day: There are 450 types of cheese in the world and 250 come from France. I wondered if the remaining 200 included that famous Aussie variety, the self-proclaimed yumminess that is Tasty Cheese. When I first saw this on the shelves of Australian supermarkets I almost tried to instigate a conversation: Oh, are you? Are you really?? Isn’t that for me to decide? The cheese was stunned into silence. But I was intrigued so I bought some. And then I discovered that it is just cheddar. Apparently cheddar is so popular over here that its real name is rarely used. Instead it is sold by strength: Mild, Sharp, Tasty, Extra Tasty (allegedly) or the delightfully named Strong & Bitey.

The thing is, I don’t need all those other cheeses from France. Just brie. Last weekend I found a way to make this exquisite cheese 10 times more indulgent than normal and I don’t mean by pairing it with a sweet Riesling. I didn’t think it was possible to feel guiltier about eating cheese, being ever so slightly lactose intolerant and almost completely in denial about it. The words of my doctor still ring in my ears: A little dairy is ok but you will probably not feel very good if you have a big piece of cheesecake.

So he never specifically mentioned cheese, per se. I proceed on a technicality.

I discovered that if you bake a round of brie in the oven, topped with some toasted honeyed nuts, it turns into heaven on a plate. Just look at this portrait of gooey perfection: 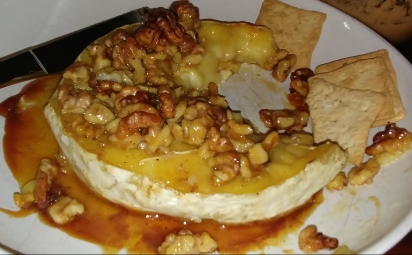 Please forgive the bite-shaped cavity which was caused not by an actual bite (I’m no savage) but by a merciless cracker attack. In my haste to enjoy the moment I forgot to photograph this beauty in its whole, unadulterated form before we got stuck in. It was worth the lack of Insta-shots. Each mouthful was a combination of warm, buttery cheese, caramelised, crunchy walnuts and a lingering kiss of honey. Now that’s what I call tasty.

1 thought on “To Brie or Not To Brie”