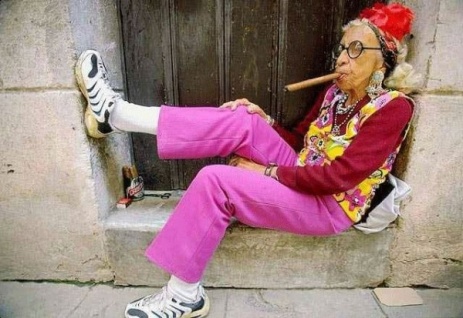 I read something the other day that both amused and alarmed me. It was an online article called ’17 Things Women Over 40 Should Stop Wearing’. Instinctively (and delusionally) my brain said Ah, this doesn’t apply to you but then I remembered that I will soon no longer be able to tick the 30-39 box on online surveys. So once I accepted that the article was targeted at women like me, I was curious.

It started off with this introduction:

‘Avoid looking like you raided your daughter’s closet by not wearing these 17 things after age 40.’

As I clicked through the slideshow I had to laugh. But in a very irritated way. The offending items? Sheer shirts. Coloured jeans. Slogan t-shirts. Halter tops. Cartoon t-shirts. Fishnet stockings. Glitter heels. Studded pumps. Ridiculously long fake nails. My irritation was two-fold:

Instead of persecuting adult women who have earned the right to wear whatever the hell we want, why don’t we focus on a much more important issue – the clothing  available to (and deemed appropriate for) young girls? Instead of shouting ‘mutton dressed as lamb’ to grown-ass women in mini skirts, why don’t we look at why our lambs have to sift through Daisy Duke shorts and ‘Pretty Princess’ t-shirts in department stores to find stuff they actually like? Is it more acceptable for an impressionable 13 year old to wear a halter top and studded pumps than it is for a self-assured 40+ woman?

The irritation grew into weariness. Are we still having this fight? Are girls still being presented with t-shirts that say ‘Allergic to Algebra’ and ‘I Need A Hero’?

Perhaps a fight for another day. In my indignation, I put on my Wonder Woman t-shirt, contemplate and then decide against pairing it with fishnet stockings and glitter heels (not because I am nearly 40 but because they are hard to put on with ridiculously long fake nails) and try to look for the positive in that article.

The author also disapproves of ripped jeans in the over 40s. Apparently, ‘intentionally wearing ripped jeans is only cute when you’re not old enough to know better.’ Intentionally wearing??? As though some of us might walk around blissfully unaware of the holes in our denim. But there it is. The beacon of light in this disheartening piece of journalism. She has completely missed the main point of ripped jeans especially in women over 40, which I get to reveal now. As shown to me recently by a girlfriend, it is a holder for your wine glass, people!!! Just ensure correct rip-placement and rip-length for maximum stability and minimal spillage. 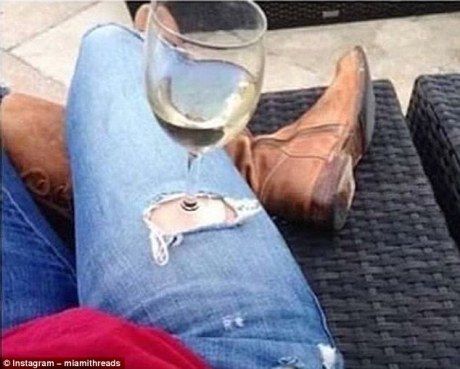 For now, if you are over 40, the only thing you should not be wearing: the weight of other people’s expectations and judgement.