When my cousin mentioned a song she likes called Blue Ain’t Your Colour, I desperately wanted to listen to the lyrics. This Keith Urban song took me down a musical path I hadn’t been on in a while – the path of cowboy boots, checked shirts, the open road and unconcealed emotion, also known as Country & Western music.

Growing up, I was familiar with the music of Billy Ray Cyrus (Achy Breaky Heart), George Strait (I Just Want To Dance With You) and of course, Shania Twain. It impressed me much. I loved how the lyrics had humour, irony, wordplay and honesty all rolled into one foot-stompin’ tune.

Country music is unapologetically direct. Pop music delivers emotion in an understated, sometimes cryptic way that is often open to interpretation. Country music just tells it like it is. Like that one friend we all have who just blurts out whatever is in her head, the one with no filter, the brutally honest, what-you-see-is-what-you-get character who the rest of us secretly want to be sometimes.

You don’t need to analyse a country song or put too much effort into guessing what it could be about. It’s all laid bare right there, often in the title. Forget about being concise. Just lay it all on the table. The lyrics are literal to the point of occasional banality, but with no beating around the bush.

When Shania Twain asks Whose Bed Have Your Boots Been Under, there’s no getting away from it. You answer the damn question. In contrast, Beyonce’s Irreplaceable, also about a cheating partner, requires much more work to understand the premise of the song. That is, you have to listen to it to realise that she is actually saying ‘You’ve been replaced’. Very misleading, that title. Also listening to the first few lines might make you think she was supervising a painting being hung on the wall (‘To the left, to the left’).

With country music there is no such ambiguity. When left for another woman, Shania puts her heart on her sleeve and sings Poor Me. When John Denver faces unrequited love he sings ‘You dun stomped on my heart and you mashed that sucker flat.’ No interpretation needed.

Another quirky feature of country music titles is the use of parentheses (brackets!) to give you the full story. To explain further. To remove all possible doubt. My favourites:

Don’t Be Stupid (You Know I Love You) – Shania Twain

She Got The Ring (I Got The Finger) – Chuck Mead

Save A Horse (Ride A Cowboy) – Big and Rich

If we applied this rule to non-country songs, we would provide sufficient information and relevant details to an otherwise vague title. I propose we add brackets to this Jay-Z song:

But the prize for the best country song title ever has to go to this one by Deana Carter. To disappointed women everywhere – she sings:

Did I Shave My Legs For This? So good it needs to be shared.

There are some sequels that should never have been made (Legally Blonde 2: Red, White & Blonde, Speed 2: Cruise Control, Grease 2, Fifty Shades of Anything – original included). There are also some sequels that should have been named in a less pun-ny way (I Still Know What You Did Last Summer, I’ll Always Know What You Did Last Summer (enough already!), Fortress 2: Re-Entry (eye-roll + snigger), Dumb & Dumberer, 22 Jump Street (they moved??).

Some blog posts, however, require a sequel. Only because some very kind and generous friends took the time to share their favourite movie (/TV series) quotes. So here’s the rest of the story……

9. The Matrix – “I think we can handle one little girl”

Just don’t give me those liquor-filled ones. That’s just being greedy. And lazy.

12. Star Wars – May the Force Be With You (I found a compilation to go within this compilation. Oh so meta!)

13. Jaws – the iconic line that has become a catchphrase to indicate underestimation of a problem, in other words: an ‘Oh sh*t’ moment.

14. Love Actually – no other words needed

I love them because:

So here’s a compilation of my favourite movie quotes. I do realise some of these were originally books but I never read the books (shock horror) so for the sake of authenticity, we’ll call them movie quotes.

1. The Shawshank Redemption – on freedom and letting go

“I have to remind myself that some birds aren’t meant to be caged. Their feathers are just too bright. And when they fly away, the part of you that knows it was a sin to lock them up does rejoice. Still, the place you live in is that much more drab and empty that they’re gone.”

2. A Few Good Men – the famous ‘You Can’t Handle The Truth!’ monologue which I may have spent hours memorising and practising (complete with Jack Nicholson sneer) when I first watched this movie.

“You want me on that wall. You need me on that wall…..I have neither the time nor the inclination to explain myself to a man who rises and sleeps under the blanket of the very freedom that I provide, and then questions the manner in which I provide it! I would rather you just said “thank you” and went on your way, Otherwise, I suggest you pick up a weapon and stand a post. Either way, I don’t give a damn what you think you are entitled to!”

3. The Light Between Oceans – on forgiveness 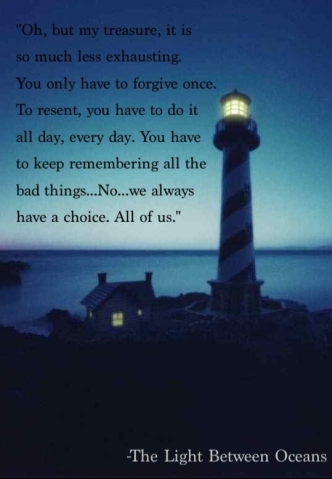 “You only have to forgive once. To resent, you have to do it all day, every day.”

4. Casablanca – on fate and serendipity

5. Skyfall – on manipulation (creepy but clever)

“My grandmother had an island when I was a boy. One summer, we came for a visit and discovered the whole place had been infested with rats. They’d come on a fishing boat and had gorged themselves on coconut. So how do you get rats off an island, hmm? My grandmother showed me. We buried an oil drum, and hinged the lid. Then we wired coconut to the lid as bait. The rats come for the coconut, and they fall into the drum, and after a month, you’ve trapped all the rats. But what did you do then? Throw the drum into the ocean? Burn it? No. You just leave it. And they begin to get hungry, then one by one…they start eating each other, until there are only two left. The two survivors. And then what – do you kill them? No. You take them, and release them into the trees. Only now, they don’t eat coconut anymore. Now they will only eat rat. You have changed their nature. The two survivors; this is what she made us.”

6. Zoolander (not exactly high-brow literature but when something makes me laugh until I snort, it has to be included in a list of favourites) – when Derek is shown an architectural model of a children’s literacy centre.

Derek Zoolander: “What is this? A center for ants? How can we be expected to teach children to learn how to read… if they can’t even fit inside the building?”

Mugatu: Derek, this is just a small…

Derek Zoolander: I don’t wanna hear your excuses! The building has to be at least… three times bigger than this!

7. Breakfast at Tiffany’s – on fear and self-imprisonment

“You call yourself a free spirit, a “wild thing,” and you’re terrified somebody’s gonna stick you in a cage. Well baby, you’re already in that cage. You built it yourself. And it’s not bounded in the west by Tulip, Texas, or in the east by Somali-land. It’s wherever you go. Because no matter where you run, you just end up running into yourself.”

This exercise took longer than I thought it would. It’s not easy condensing your favourites into one list. So for now, a work in progress. And a favour to ask – let me know your favourites. I need inspiration.

I had an eye test the other day. I answered all the questions truthfully and with enthusiasm.

Which is clearer, red or green? Green!

What about now? Red!

If I put this lens on, is it clearer now? Yes, oh yes!

At the end of the test, he told me I could probably do with a prescription.

Well that’s just great. So now I have a professional diagnosis of only being able to see things clearly if they are in front of my face. Can’t see too far ahead. Anything in the distance may be blurry. I suppose I was never too good at planning ahead.

Before I let my inner Eeyore take hold and carry on this strain of doom and gloom, a thought strikes.

Am I missing an opportunity here? This could be fun! A reason to go shopping. A new must-have (no, really) accessory. A new way to channel my inner style icon. And best of all, a way to look intelligent even when thinking vacuous thoughts.

There is more good news. Those very stylish Carla Zampatti sunglasses that caught my eye (from close range) can be made with my prescription. So I can get wrinkle-protection to go with eyesight-correction. 2-in-1 anti-ageing. Bring it on.

The thought of putting contact lenses anywhere near my eyeballs fills my heart with dread and makes my skin tingle. Not even the possibility of getting green lenses and pretending I am Esmeralda from The Hunchback of Notre Dame is enough to convince me. So I try to think of stylish people that wear glasses.

But from somewhere in the far recesses of my brain where large quantities of (sometimes useless) words hang out, a Dorothy Parker quote hurtles forward: “Men seldom make passes/ At girls who wear glasses.” I send that one promptly back to the vault because a) completely irrelevant, b) who cares? and c) Sophia Loren.

Also, I don’t have to look too far (luckily, because apparently I can’t) for inspiration. My beautiful mother wore, in the 70s, super stylish black-rimmed glasses that made her look like the Greek singer Nana Mouskouri. 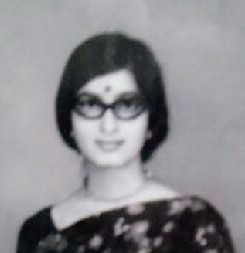 And if all else fails, there’s always Velma from Scooby-Doo instead. I think I already have an orange turtleneck. 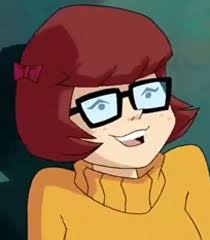 Sometimes, all you need is a new perspective.

With apologies to John Steinbeck and my Mama.

In my youth I was willing and able
To drink most folk under the table
I claimed it was genes
Or some other means
That kept me remarkably stable.

But now I’m substantially older
A supposed wise head on my shoulders
Two glasses of wine
Are probably fine
Any more and those grapes say ‘We told her!’

The first time I test out this theory
The grapes get unreasonably leery
2 champagne and 2 wine
At the time I feel fine
But those grapes, they show me no mercy.

The next day is really quite nasty
The worst kind of ‘after party’
I take refuge in bed
With my throbbing head
But the 3 year old still has karate.

My punishment befit the crime
To walk there and stay the whole time
10 kids scream ‘Hai-ya!’
My head is on fire
Please tell me it’s nearly bedtime.

So now that I’ve learnt a big lesson
Albeit through retrospection
My friends Pinot & Riesling
You’ve been wonderfully pleasing
But you’re charged with post-drink aggravation.

There’s no need to call me a bore
My liver will thank me much more
If I choose liquid kale
Over wine or pale ale
And you’ll still find me on the dance floor.